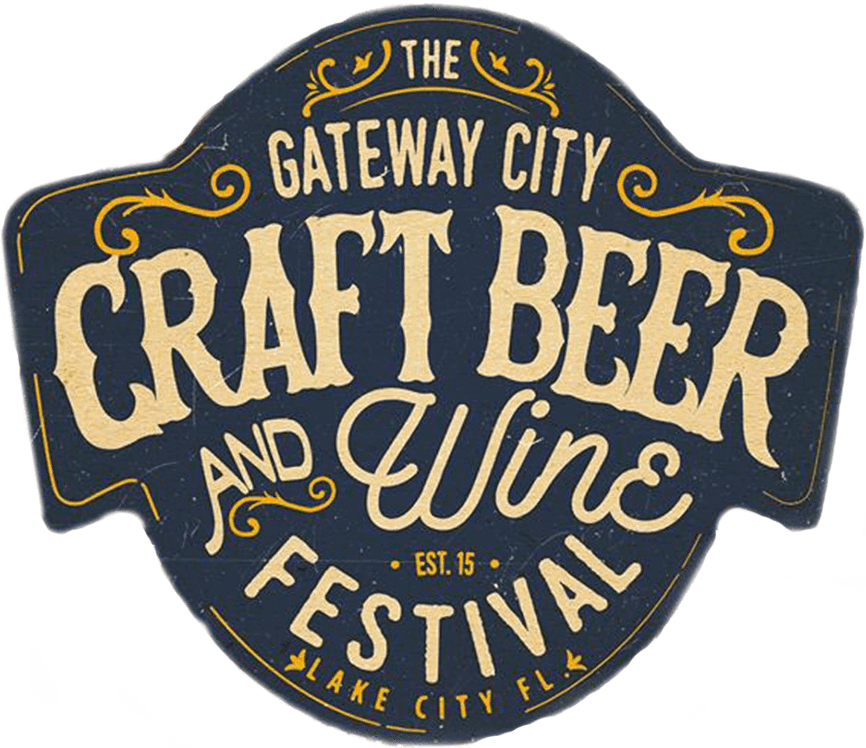 For many folks traveling down I-75 on vacation, Lake City, known as the Gateway City, is quite literally the first introduction they get to Florida. Unfortunately, most people simply stop by for a quick bite or gas refill before heading farther south. What people don’t realize when they zip by is how much they’re missing.

My wife, Ashley, and I took a trip to Lake City for the 3rd Annual Gateway City Craft Beer and Wine Festival. Being craft beer aficionados, we’d attended several festivals, but we weren't sure what to expect from this one. I would never have guessed how big craft beer was in Lake City.

Set along the sunny shores of Lake De Soto near Downtown Lake City, the festival had rows of beverage tents with the music stage in the middle. With the lakeside views, it was certainly one of the most picturesque beer festivals that I’d attended. The beautiful day gave way to a gentle breeze that caused the moss to sway in the trees. Cornhole and Jenga games lined the field next to the vendor tents, and several food trucks were parked along the outer edge of the festival. To our surprise, the festival was somewhat large, yet it never felt chaotic like several festivals we’d been to. Everything had a relaxed vibe, which helped me to slow down and enjoy the moment.

Between the smell of fried foods from the food trucks and the thought of cool beer and wine under all of those nearby tents, we had a hard time deciding where to start first.

We started on the wine side, which included a variety of Florida wines, such as the rich reds from San Sebastian Winery out of St. Augustine, sangria and spiked seltzers. The folks from Fifth Generation Farms, a market focusing on locally sourced food, had several kinds of sangria and some amazing cheese from Wainwright Dairy out of neighboring Live Oak. My wife and I tried a few of the local cheeses, and I may have come back for a few more pieces of the chipotle cheese. At each of the tents we visited, everyone was warm and inviting—always thrilled to talk about their products while sharing a story and a laugh. The festival brought out that small-town hospitality at its finest.

For beer, the festival had a great selection of craft breweries represented, including Florida favorites such as Bold City out of Jacksonville, First Magnitude out of Gainesville and Crooked Can out of Winter Garden. With our cups in hand, we went through everything from sours to stouts. We tasted samples from Cigar City Brewing, one of Florida’s largest and most well-established breweries, to smaller breweries including High Springs Brewing Company, located in nearby High Springs.

Halpatter Brewing Company ran the one tent that swarmed with people at all times. Halpatter, which opened in December 2017, is Lake City’s first craft brewery. That’s right—Lake City has a brewery, and one more, Water Town Brewing Company, is on the way. There were plenty of beers to sample, including a collaboration with Water Town, a refreshing Mint Kiwi Gose that paired perfectly with the warm spring day. After speaking to the Halpatter folks for a while, they invited us to take a tour of the brewery after the festival. I’ll never say no to a good brewery tour.

For the festival, we sprang for the VIP tickets, which I highly recommend because they included early entry, two “full pour” drink tickets, a $10 voucher to use at any of the food trucks and private seating under a shaded pavilion. An added bonus was that they served speciality beers in the pavilion, including Funky Buddha’s highly sought-after Maple Bacon Coffee Porter. It was nice to be able to sit back in the shade and listen to the Jamie Davis Band belt out tunes while sipping beer. Ashley grabbed a mushroom pizza while I indulged in a bacon macaroni-and-cheese grilled cheese. You don’t go to a beer festival to watch calories.

As the sun started to set and festival foot traffic began to thin, my wife and I headed over to Halpatter Brewing, which was located just a block away from the festival. Walking up to the brewery, you’d think you were climbing the steps of a courthouse, but inside, the building had been totally transformed. I’ve been to a lot of craft breweries, and this one might be the most beautiful I’ve ever seen. From hand-blown glass chandeliers to light fixtures and tables made from old fire escapes, the level of detail and craftsmanship that went into the facility is stunning. That same level of craftsmanship goes into the brews, such as Chief's Beach, a tasty coconut coffee porter, and the Big Hal, a dry hopped American brown ale that’s quite smooth.

It only makes sense for Lake City, the Gateway City, to have an amazing festival that showcases the great local products being made there and all around the Sunshine State. For so many people, this is Florida’s first impression, and with what I’ve seen, Lake City makes a great one.

Plan your visit to Lake City in Columbia County